On October 19th 2012 we sent our management team to meet Walton MP Steve Rotheram to tell him that his idea to re-record 'He Ain't Heavy' for Xmas 2012 was impossible in the time period as Xmas singles are planned by the likes of XFactor 6-9 months in advance. I suggested the idea for a Xmas single but I thought the original couldn't be equalled.

We were on tour so couldn't make the meeting but we got a text after the 3 hour meeting (on the night of Steve's lads 21st which he missed the start of due to the length of the meeting) to say IT'S ON! The next day our management rang to explain that they were swept away by Steve Rotheram's natural enthusiasm. They said it was 'Shanklyesque' and they simply couldn't say no.

From that day on hundreds of people put their own projects/ego's to one side and worked on the single for the common cause to raise as much money for all 96 families of the Hillsborough disaster and keep Hillsborough in the news in the run up to Xmas. It is probably one of the most remarkable stories in the music business with over 400 people working on the single for free and over 400,000 people buying it. The whole project was turned around in a month and was launched on Nov 22nd - thanks to all who supported us!

Peter started The End fanzine in 1981 focusing on the city of Liverpool and in particular youth culture with the emphasis on the music scene in the city and football, the fanzine was a huge influence on many future fanzines and writers with John Peel a big fan of The End. The final issue was published in 1988. Peter is a founder member of the Liverpool band The Farm.

In September 2011 a collective of musicians performed a one off 'Don't Buy The Sun' concert at Liverpool Olympia, The Farm and Pete Wylie were joined by Mick Jones from The Clash who enjoyed the experience so much that he told Pete and the rest of The Farm in the following days that it reminded him of why he picked up a guitar in his teenage years, to protest against injustice. He said he would like to take the band on the road and capture the spirit of the night and to be free from the corporate pressures of the music business.

The Justice Tonight Band was formed.

A tour of the UK was announced with the aim to help raise awareness for the ‘Hillsborough Justice Campaign’ in order for the truth to be told about what happened on that fateful day and not the lies and deceit that have appeared in parts of the press and police reports.

At each sold out show the band were joined by musicians from the city they were playing in with the likes of Ian Brown, John Squire, John Power, Richard Hawley, Primal Scream and Paul Simonon lending their support to the cause. John Robb introduced each act which saw a set from The Farm, followed by Pete Wylie with the final hour given over to a set of classic Clash songs with all musicians, audience members and in particular Mick Jones grinning from ear to ear!

Sporting Memories attended the show at Sheffield Leadmill (a QPR supporter and a Villa supporter who weren't at Hillsborough but have felt passionately about the fight for Justice from day one as any right thinking person would do), a room full of people there to hear great music and support a brilliant cause, the atmosphere on the evening was unlike anything I've experienced in many years of gig going, the chant of 'Justice For The 96' that went up spontaneously was a real hairs on the back of the net moment, there were people at the gig with allegiances to many different football teams but they all came together as one in support of the 96 and their families. The fact there were so many brilliant songs packed into the set and each artist on the stage gave up their time not to promote a new album or top up the pension fund but to protest against the greatest injustice of modern times made the night even more special, never underestimate the power of music!

The Justice Band were invited to support The Stone Roses on four dates of their comeback tour and were even joined on stage in Lyon, France by Eric Cantona for rousing versions of 'Should I Stay Or Should I Go' and 'Rock The Casbah'. 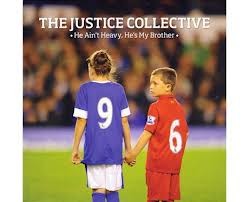 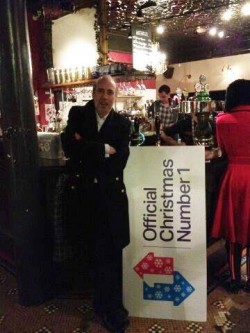