Now I know that this will be hard for Leeds United fans in 2012 to get there heads around but for a moment try and imagine that Lionel Messi had spent the first 8 years of his professional life playing at, say, Championship side Barnsley. Because in the 1950’s that is the equivalent for when John Charles played first team football at Elland Road from 1949 until he left for Juventus for a world record fee at the end of the 1956-57 season.

His ability and place in the lexicon of the greatest ever players has been well established and documented elsewhere and it is not the intention of this piece to dwell on that, suffice to say that he is the only player to be selected in two positions in the same ‘best ever’ World X1. His pace, dribbling skills, fearsome shooting and best of all, his heading ability made him the complete footballer. And he played for lowly Leeds United, during which time they became widely tagged in the media as ‘Charles United’, particularly after he moved into the number 9 shirt. However I have always felt that that tag did a disservice to the remainder of the team that played with the great man throughout much of that era. Statistics however do not help me back up my gut feelings because throughout the tenure of the great mans’ first spell at Leeds we were distinctly average, rarely challenging for promotion and a miserable FA Cup record (the 1950 cup run notwithstanding). That all changed, of course, when we were promoted in 1956 and then finished 8th the following season, with John scoring 38 goals and ending up leading League 1 scorer.

The 1955-56 promotion side were my schoolboy heroes and this is probably the reason why I always feel somewhat aggrieved with the ‘Charles United’ tag. Followers of the Revie sides would read his team sheet as a litany whereas mine always started “Wood, Dunn, Hair, Gibson, Charlton, Kerfoot, because after Charles moved to centre forward (yet again) in September 1955 then that defence was picked in the majority of the remaining games of the season. Indeed Carter – the manager – only called on 19 players all season. Four of that defence (Jimmy Dunn, Granville Hair, Jack Charlton and Eric Kerfoot) to this day still feature in the clubs all time top 20 league appearances. The emergence of Jack Charlton at centre half, after an initial settling-in blip, allowed Charles to take advantage of a reliable defence, coupled with two brilliant wingers in George Meek and Jacky Overfield providing the crosses, for Charles to score 67 goals in 81 league appearances in his last 2 years with us. Those two seasons alone, for me, should have dispelled the ‘Charles United’ myth once and for all as we played with a brio I had never believed possible from a Leeds United side.

Unfortunately these accusations would resurface as soon as John left for Juventus, as Leeds failed to realise that as well as replacing the irreplaceable they had to contend with the first team becoming past their best as old father time caught up with them. Influential inside forward Albert Nightingale was injured in the first game back in the top flight (a fantastic 5-1 thrashing of Everton) and never played; again whilst fellow inside forward/striker, Harold Brook, was already cheating the grim reaper by then. These reasons, along with dreadful management after Carter was sacked, meant that the team ended up baring more than a passing resemblance to what we have today (without the likes of Byram and Lees!!)

As attendances crashed from being over 40,000 for some games in 1957 to just 9,000 in 1960 United’s supporters were in a very dark place, but then little did we know then what lay just around the corner for us!!! In my more far-fetched moments I have speculated what would Leeds United have become had John Charles been born 10 years later? A front line of Lorimer, Clarke, Charles, Giles and Gray would have surely have ruled the world!!!

I never had the opportunity to ask the great man “Why”? Why stay at Leeds United when, according to his autobiography, 1st Division clubs were queuing up to buy him? Obviously domestically the Maximum Wage was one very obvious reason as, legally, he could not earn anymore playing football in the UK but had he gone he could have had at least 5 or 6 years more years in the top division along with the possibility of domestic honours. The Leeds board, by refusing his transfer requests, obviously knew what they had and realised that the football gravy train they were on in those days (for that what it was) would soon be over should he leave. It says much about the man that he felt a loyalty to Leeds for backing him when he was so young.

I feel so privileged to have witnessed the best in the world play for my club.

So to answer the original question – were we ‘Charles United’? Well, the facts probably say “yes”, but sentiment sent says “no”!

Our thanks to John Cave & The Square Ball, where this article first appeared 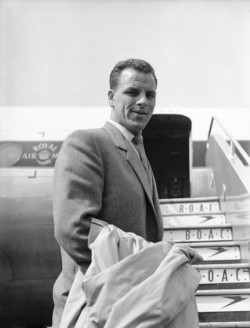