Apparently I am a frequently asked pub quiz question! This fact really helps to tie together all my favourite memories of my playing career. I remain to this day, the only player to have captained cup winning teams North and South of the border! I was twenty one years of age and captain of Aberdeen when we beat Celtic 3-1 at Hampden Park in the 1970 Scottish Cup Final.

Seven years later I captained Manchester United in the FA Cup Final at Wembley Stadium when we beat Liverpool 2-1 with goals from Stuart Pearson and Jimmy Greenhoff. Our victory actually denied Liverpool a treble as the following Wednesday they went out and won the European Cup.

Born in Aberdeen, I began playing for their unofficial nursery side at the age of twelve and signed professionally at the age of seventeen. I spent the early part of my professional career there, playing six seasons for the Dons until my move South of the border. This came about a week before my twenty third birthday, having recently played for Scotland under 23’s at the Baseball Ground in Derby. This was back in the day when their pitch consisted of six inches of mud! I had a pretty good game that day against two guys called Malcom McDonald and Kevin Keegan. Jimmy Bonthrone, my manager at Aberdeen told me there were three clubs that had expressed an interest in signing me. These were Liverpool, Leeds and Manchester United. Jimmy was very fair and kept me in the picture. United were actually the first club to come in with a bid, which was £125,000. I travelled to Bellshill with Jimmy and met with Sir Matt Busby and United’s manager, Frank O’Farrell, the United Secretary and their Chief Scout at the Bellshill Hotel and the deal was done.

I made my debut later that week on the 4th March 1972 against Spurs, playing against Alan Gilzean and Martin Chivers. One of my most treasured possessions is a photograph from that game. To get from the dressing room to the pitch there was a set of stairs you had to run up. In that photograph, there is a certain gentleman right behind me who went by the name of George Best. It’s a black and white photo. What is fascinating about it is there is no logo, no number, not even the Manchester United club badge. It is a completely plain shirt. How times have changed.

I spent 11 ½ years at Old Trafford and was privileged to play alongside the three players who now have statues outside the ground – Law, Best and Charlton. George was a very unassuming, gentle guy, good to be around. In the dressing room you really wouldn’t have suspected he was one of the greatest players in the world. It was a curious mix in the team back then, there were these superstars running out in the same team as some guys who’d have struggled to make the reserves at Aberdeen! The season ended in relegation and Tommy Docherty came in and was given the chance to rejuvenate the club.

The two seasons after we won the Second Division Championship and came back into the First Division were the happiest time of my career and the best years of my life. It felt like we could give teams a two goal start at Old Trafford and we’d still beat them and of course there was almost a fairytale come true. After losing to Southampton in the 1976 FA Cup Final, I listened to Tommy Docherty consoling the crowd by the Town Hall steps and he promised them there and then that we would go back and win the trophy the following year, which of course we did. To stand on those steps and hold the FA Cup trophy aloft, as captain of Manchester United was like a dream come true.

The FA Cup Final was the last game of the season and it pretty much felt like the whole world was watching it (which it probably was!). Coverage on TV started around lunch time and even showed us leaving the hotel and the coach journey to Wembley. During the two weeks after the Semi-Final, as players, we were pretty much in demand for interviews and the like, but nothing compared to what the Manchester United players face nowadays for every single game. They can’t step out of their houses now without someone with a mobile phone taking pictures. The privacy that was afforded to us back when I was playing is something I value and I don’t think I’d swap my playing days for now.

One away ground that really stands out in my memory was Roker Park. There was always one hell of an atmosphere there. We had a series of matches, I think in the League Cup, where we had two replays against Sunderland. I got very pally with Billy Hughes and Bobby Kerr. I think we eventually won through when David McCreery came on as a sub and scored the winning goal. The Roker Roar was phenomenal. It was a great ground to play at, simply for the atmosphere. Even though the fans were shouting for the other team, as a player you could still enjoy the atmosphere and Roker Park was certainly somewhere special. I always enjoyed playing at Anfield too. Liverpool were the dominant club in the 70’s, there was always a great atmosphere and we could always raise our game against them, but what we couldn’t do at that time was then go to Coventry on a wet Wednesday night and eke out a 1-0 win, which Liverpool were experts at doing!

In the mid seventies, QPR had a real stand out team, but what really sticks in my mind when I think of trips to Loftus Road was something that happened before a game. Gordon McQueen was United’s centre half and on the coach down, he mentioned he was leaving some tickets at reception for the star of Rising Damp, Leonard Rossiter. I was a big fan and it turned out Leonard lived in Shepherd’s Bush. I asked Gordon if he would introduce me to him when we got to the ground.

I used to have a pre-match routine that started at about five past two. I’d do stretches and start getting myself ready, put the left boot on before the right, all that nonsense! Anyhow, I got off the coach and met Leonard in reception and got chatting, he was a huge squash fan and played regularly, in fact I subsequently went to see him play a charity exhibition game in Manchester against the comedian Don McLean. In my excitement at meeting him I’d lost track of time and next thing I know it is twenty five to three and I’m still stood in reception!!

Dave Sexton, who subsequently went on to become United manager was at Loftus Road at the time and had a great side, with Gerry Francis captaining them and Don Masson, with whom I played alongside in two World Cups for Scotland. I still keep in touch with Don.

When I finally left Old Trafford I spent two very happy years playing under Joe Royle at Oldham. I’d actually played against Joe at the start of my career in a Scotland under 18’s game against an England team that included Joe, Brian Kidd, Peter Shilton, Trevor Brooking, Mick Mills. One game that stands out with Oldham was an away game at St James’ Park when we played a Newcastle United side that included a bit of a lanky young guy with a rather strange haircut who did rather well against us. He went by the name of Chris Waddle….

Enjoyed this memory? Read more from Martin as he recalls his international career with memories of Best, the Welsh Airforce & Jairzinho

Although I am an Everton supporter, and used to play most weeks, still managed to watch Martin play a few times because Steve Coppell is a friend and I saw the 3 Cup Finals in the 70's and enjoyed the win over Liverpool! 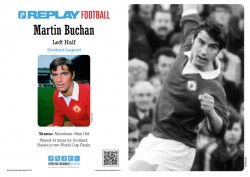